Comments Off on JANUARY 24, 2021 WORSHIP SERVICE

Comments Off on JULY 12 WORSHIP SERVICE 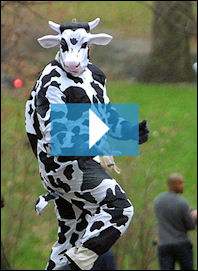 Jonathan Payton has a message to share. At least I think he does, but I have no idea what that message might be. All I know is that most people don’t purposely draw attention to themselves when they’re about to break the law—unless they are making a significant statement. This is the kind of approach an organization like Green Peace has used to bring attention to important animal rights issues, for example. They sometimes break the law to get media attention.

Now, I have no idea what Jonathan’s message is, but maybe if I tell you what he did, you can help me figure it out. OK, so what exactly did Jonathan do? Well, first of all, he dressed up in a cow suite. This, in itself, is a statement of sorts, don’t you think? I mean you don’t just wake up in the morning and think—“Today definitely feels like a cow-suit day!” There had to be a reason for his choice of vestments—particularly when you find out what he did next.

Jonathan then proceeded to enter a Wal-Mart, load up a cart with 26 gallons of milk and then he ran out of the store without paying. As he sought greener pastures, he gave the milk away to passers-by. Galloping from the scene, he went right past a local McDonald’s (thankfully McDonald’s doesn’t seem too interested in using fresh beef or things could have “ground” to horrific halt! What would have happened if it were Wendy’s instead?). Jonathan was eventually corralled by local police. They gave him a summons, and then released him in “udder” disgrace.

END_OF_DOCUMENT_TOKEN_TO_BE_REPLACED

I have a dear friend who is a gifted musical-type person. Not only is she a music teacher, but she also is an able musical director, in fact, presently she is a choir director with a community choir in the West end of Toronto.

Now, I have had the occasion to hear glimpses of this choir as it has practised and it is truly a very gifted group of singers. They sounded rich and vibrant as their harmonies effortlessly blend together. This is a choir that would give the cast of Glee a run for their money!

Recently I asked my friend when the choir would give their first performance, with her as their director, and she commented that a public performance wasn’t on the horizon anytime soon. In fact, they probably won’t perform publicly this year at all.